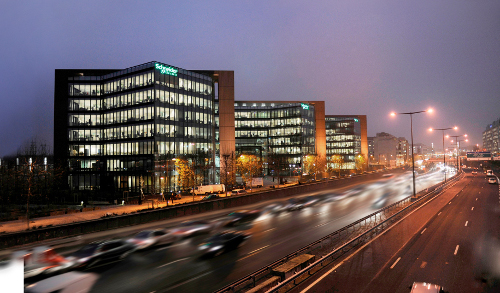 When Schneider Electric Buildings was facing the challenge of building their next generation product portfolio, they realized that they needed a partner sharing their agile values and bringing in knowledge in developing solid web solutions. As always there was also need for reduced cost and i creased productivity. Using Softhouse as a partner turned out to be the right choice.

Initially, a Scrum Team was created at Schneider which focused on fast delivery. Other Lean and Agile principles were then introduced gradually. Hence, the partnership with Schneider was formed step by step. ”We believe that a step by step approach is one of the success factors,” says Niklas Landin, Business Unit Manager at Softhouse. “We can’t expect our customers to give us full trust at the start of a new contract, and we can’t expect our customers to change their way of interacting with a new sub-contractor from day one. It takes time to build trust and to change behaviour.”

To build quality in right from the start, cooperation was based upon four ingredients:

2. Test Driven Development
A second ingredient is that the team works with Test Driven Development (TDD). When the team breaks down user stories to coding tasks, they also write automated unit tests to cover all the acceptance criteria. When relevant, team also writes automated integration tests to verify the acceptance criteria.

3. Instant verification of user stories
A third ingredient is that the team involves testers from Schneider’s system test department upfront to verify user stories as soon as they are coded (rather then delivering a complete release at the end of the project for system test).

4. Team responsibility
The fourth ingredient is that the tea takes full responsibility both for developing new requirements as well as maintaining the version in production. These four ingredients have given the expected effects. The team puts focus on quality, and do not allow defects to pass through.
“We continuously report the number of defects found in each project to management, and this project is always at the bottom of the list,” says Ulf Magnusson, product owner at Schneider Electric.
”Last period, they had only three small defects found during system test, which is a lot less than the average project. We’re pretty impressed!” The automated tests increase productivity, not only due to few defects found at later stages, but also very much when used for regression testing. The automated tests have also proved very useful as a way of quickly teaching new developers the system. In addition, the continuous dialogue and involvement from the Product Owner and test department increases productivity by avoiding misunderstandings and defects to pass through.